Albuquerque, NM, Rock | Alt. Folk | Alt. Country | singer songwriter JD Nash has experienced a little bit of everything, touring across the US in previous bands, while dabbling in a handful of different genres over the last decade. His latest release, mixed and mastered by Chris Common (Le Butcherettes, Chelsea Wolfe, Antemasque), points listeners towards classic rock influences from the 60s and 70s while adding touches of more modern Alternative Folk and Alternative Country. For fans of Wilco, Jeff Tweedy, Kansas, The Eagles, Father John Misty, Israel Nash, and Midlake.

Available on all streaming services 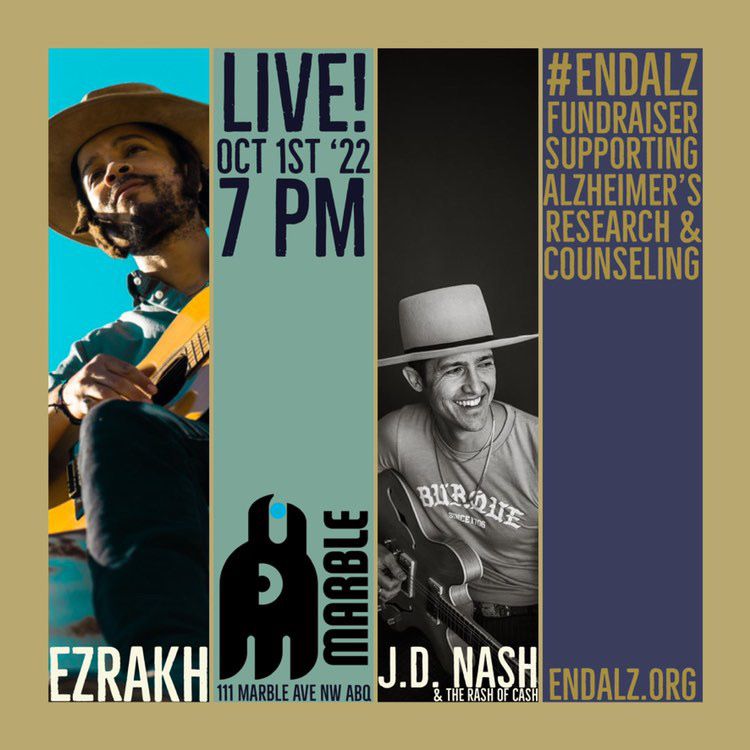 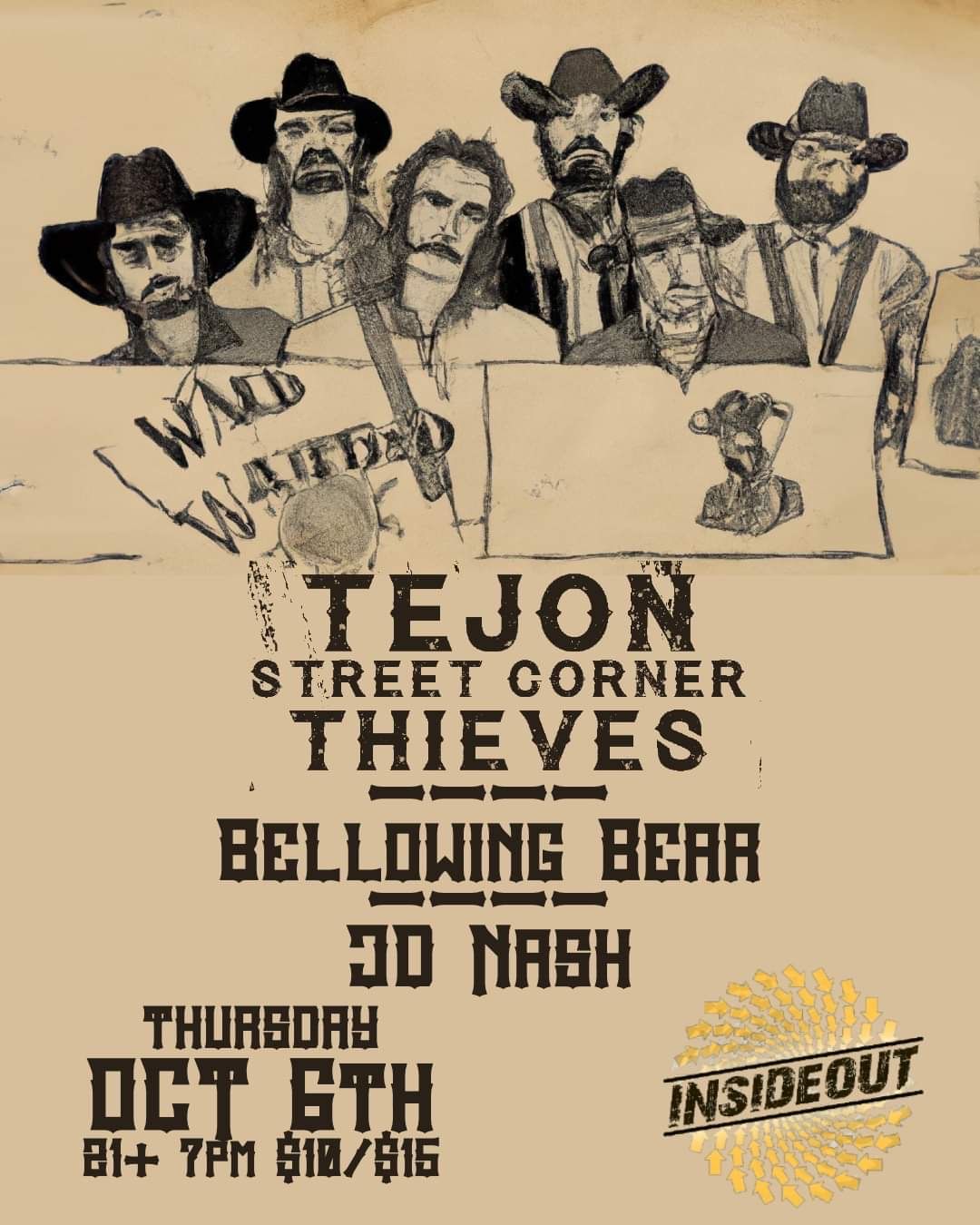 Two amazing shows coming up. These are your last 2 chances to watch us until November or December. Come say hello to Fall with some beautiful patio weather. You all were so good to us last year on the Patios, I know you’re wanting your fix before you hibernate. And you know what, you deserve to treat yourself out to 2 nights out. Call up the sitter, get a room downtown, let’s have ourselves an amazing week of music.

First up is Saturday October 1st at Marble downtown (easily the greatest patio for music in the southwest) with the amazing @ezrakh featuring my homeboy Jabez.  This show is a benefit to end Alzheimers, with a portion of sales for the night benefiting Alzheimer Association's New Mexico Chapter.  #endalz

There’s something extra special about this performance. @bezinthebiz , Ezrakh, and myself are all public school teachers. Come show some love for Albuquerque’s teachers that work double time playing gigs after week of teaching. The following Thursday October 6th at 7pm show up early to watch us open up the night in support of @tejonstreetcornerthieves , and @bellowingbear at Albuquerque’s uniquely topless (it has no roof) bar @insideout505 . TSCT recently opened up for Amigo the Devil at the revered@roe Wolf Santa Fe. We know most of you are on fall break that weekend, so why not start your weekend early! We played first and only for a short amount of time. Remember to show up early. I’m so grateful for all of the recent opportunities, congrats to @yogavibrationsnm for a successful first Cannabis and Yoga festival. Look out for their amazing class offerings online. So much love for everyone. We want to feel the energy and share it all together. See you soon. JD Nash and the Rash of Cash

Sometimes a good band photo session can be inspiring.  Image isn't always everything, but I have learned that a memorable image can help people recognize you.

Well, we buckled down, Edgar Wonder brought his DSLR and Eyeluh (my fiance) took some photos of us outside of our new practice space.  We're pretty pleased with how they turned out.

What you see is Albuquerque's newest addition to Alternative Country Music.  JD Nash and the Rash of Cash.

We're coming at you hotter than a branding iron on a cow's hide.  You're not going to want to miss some of our upcoming shows, where we're likely to play some of your favorite classic country tunes, as well as some modern alternative country. As always, with our very own blend of high-desert vibes.  One thing is for sure, we'll have you two-steppin the night away and wanting more.

Myself (JD Nash) and Edgar Wonder will be playing an acoustic set at Lizard Tail Brewing in Nob Hill, Friday 1/21, from 7-11pm.

We hope to see you there.

What's In A Name?

“What’s in a name? That which we call a rose/ By any other name would smell as sweet.” - Shakespeare

I would like to introduce to you the group behind the sound of the last 4 months of performances.  You may have noticed that almost all of my performances since August have been with a group of musicians sharing the stage.  This is my favorite way of showcasing my music because playing music with others is absolutely magical.  Solo performances are great as well, but there is a special place in my heart for playing with a band.  It feeds my soul. This has been an exciting time, as I generally write songs to be played with a full band.  I feel like people are generally more inclined to tap their feet, or get on the dance floor when there is a band playing.  It's been great to see people dancing to my original songs.

Without further ado, I introduce to you the members of the band (name to be revealed in a later post):

Derek Lujan (Bass) - Derek is a long-time musician, music lover, and overall great human being.  He has been a supporter of the Albuquerque Music Scene for years.  Derek is a strong supporter of the arts, and a general lover of all things.  He is a blues music aficionado, but he is equally comfortable listening to some the JD and Luke's favorite prog rock groups.  Believe me, you'll want this guy on your team.  He'll motivate you to a whole new level.

Luke Seelau (Drums) - Luke is one of the most active drummers in the Albuquerque Music Scene.  You can catch him playing with a number of great bands around town, including, but not limited to, The Horned God, L'uomo Nero, Stem Ivory, The Jimmy Climbs Band, Doug and the Dying, as well as our alternative country and alternative folk outfit.  You may recognize him because of the billboard we bought him for his birthday.  He truly is The People's Drummer.

Edgar Hernandez (Guitar and Vocals) - Edgar has been involved in creating and building community around the Albuquerque Music Scene since he move back from Austin almost 8 years ago.  He is a local music producer under the name Edgar Wonder, and a highly acclaimed composer.  He currently helps run the Monsoon Music House collective, booking, curating, and generally making things happen for a wide variety of talent around Albuquerque.  You may recognize him from some of your favorite bands around town, making appearances with Albuquerque's favorite Psychedelic Indie Rocker, Lowmello.  Edgar produced the last 4 singles that I released, namely, Someone Special, Dreamcatcher, Cali Comfort, and Shock Therapy.

Tune in for the next installment of this "blog", when I will reveal to you the current name of the gathering of musical talents.

For now, I hope to see you all at the December 12th fundraiser show at 2 Cranes Bistro.